October 22, 2020 – Dayco, a leading engine products and drive systems supplier for the automotive, industrial and aftermarket industries, marked a decade in Australia’s premier Supercars Championship during the Covid-19 disrupted 2020 season. 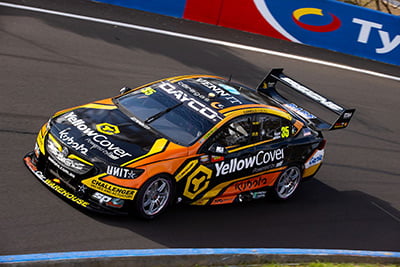 One factor has remained the same throughout Dayco’s Supercar involvement over the years and that is the racer doing most of the ultra-high-speed driving, highly experienced long term Dayco Ambassador David Russell.

Dayco’s decade in Supercars was marked with large front windscreen and rear wing signage on David Russell and Garry Jacobson’s MSR Commodore Supercar at the 60th running of Australia’s great race, the Supercheap Auto Bathurst 1000 held from October 15 to 18.

While ultimately this 10th Dayco visit to Mount Panorama ended prematurely just 62 laps into the 161 lap race, “Dayco Dave” Russell and Garry Jacobson  had performed strongly during the practice sessions, Russell placing the car into the top five during his co-driver sessions, with the car consistently close to the top ten throughout the preparation days despite the setback of an early engine replacement.

Russell and Jacobson were making up ground during the opening stages of the 1,000 kilometre race, Russell frequently among the fastest drivers across the top of the mountain, but lacking straight line speed due to the use of a spare engine that later in the race would fail, forcing the car’s retirement.

Dayco’s presence at Australia’s greatest motor race in front of major television audiences both locally and abroad throughout the four days ensured that this leading automotive aftermarket brand made the most of the only Supercar two driver endurance event of the 2020 season, with the other two having been cancelled due to the Covid-19 pandemic.

Dayco’s 2020 motorsport program was heavily impacted by the pandemic in Australia and internationally, with Russell planning to compete with fellow Dayco Ambassador Roger Lago in the 2020 Porsche Carrera Cup Australia Championship. Despite having completed one round, this along with a number of local and international GT Sportscar events were cancelled.

“We made the most of a bad situation in 2020 and we are very proud to have joined Dave Russell once again at our country’s greatest motor race,” Arnold Mouw, Dayco Australia Managing Director and Vice President, Aftermarket Asia Pacific stated.

“Of course, we are disappointed that we couldn’t do all of the customer events across all of the race events that we had planned, but this situation was the same for everyone involved in the sport this year. It is a tribute to all involved with Supercars that they managed to complete a disrupted season when so many other sports and racing categories could not. We have enjoyed being a part of the sport over the last decade with Dayco Dave and look forward to returning to a much more normal motorsport program in 2021.”

Dayco has more than 40 locations in 22 countries and over 4,000 associates. For more information about Dayco, visit the Company’s website at www.dayco.com